Your cart is currently empty

For the record, I am not a purist and have no problem with people coloring their hair. Both of my daughters do and they look lovely. This is about my journey. 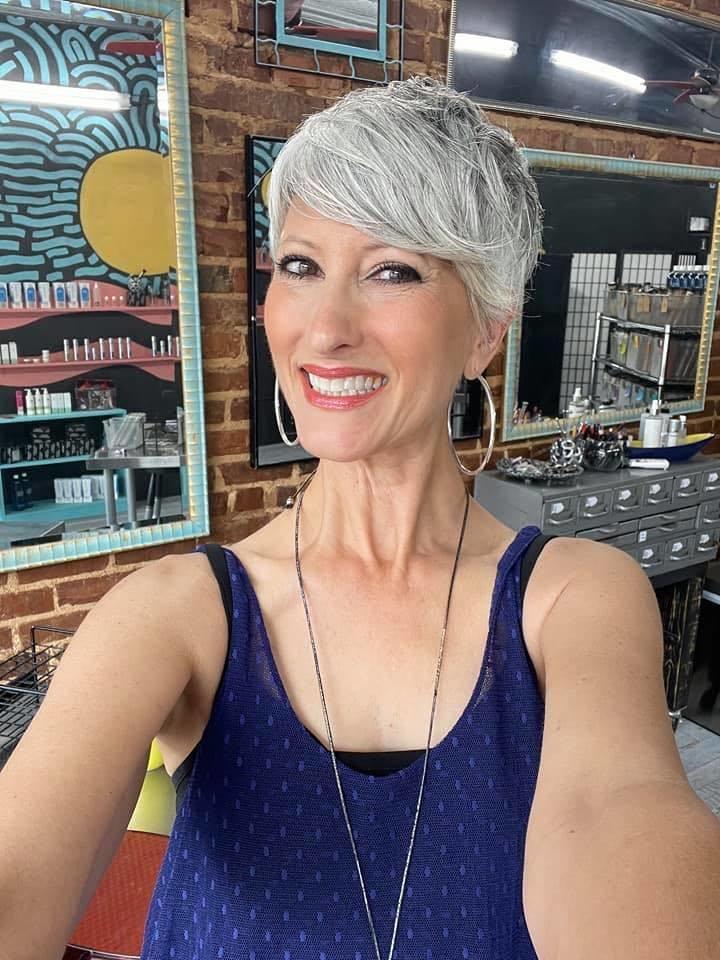 I used to love coloring my hair. I started at a young age using sun in (gasp!) to get that advertised blonde highlight beach look. It wasn’t cute, but It was all the rage and allowed by my mother. I later experimented with so many colors and settled on a beautiful, moderate, cool red which was a favorite of mine for a while. Another good option for me was a purpley black. It was what my hair was prior to becoming frustrated with the need to color it almost every other week to keep up with the gray line (my hair started turning gray at age 18). I consulted my stylist at the time and she convinced me to go blonde. As you can imagine, the process from black to blonde was a lengthy one. For years, I attempted this look. Looking back at photos I never did look quite right. It definitely did not look natural or even complimentary. Perhaps there were times that the blonde was better than others depending on which concoction my stylist prepared. All in all it just never looked on point.

As I aged I noticed that my ability to pull off blonde hair was dwindling. I knew it was time to go gray when I constantly looked tired and had to work too hard on my makeup. It did not matter if my makeup was the correct color or looked amazing because I was walking around with my hair framing my face that was not in my color palette. I had the best hairstylist attempting to get the correct hue and my stubborn hair was determined to rebel. The strong yellow undertone (core of my skin/hair) pulled every color applied more orange-yellow. Despite the toner applications and having the very best stylists in town work with me my hair was saying NO! No, to hair color. She had had it. She no longer wanted to be covered and wanted to be revealed for who she was.

I'm younger in this photo and just really.... not as cute as I am now! It was a silly party don't judge my outfit hahaha 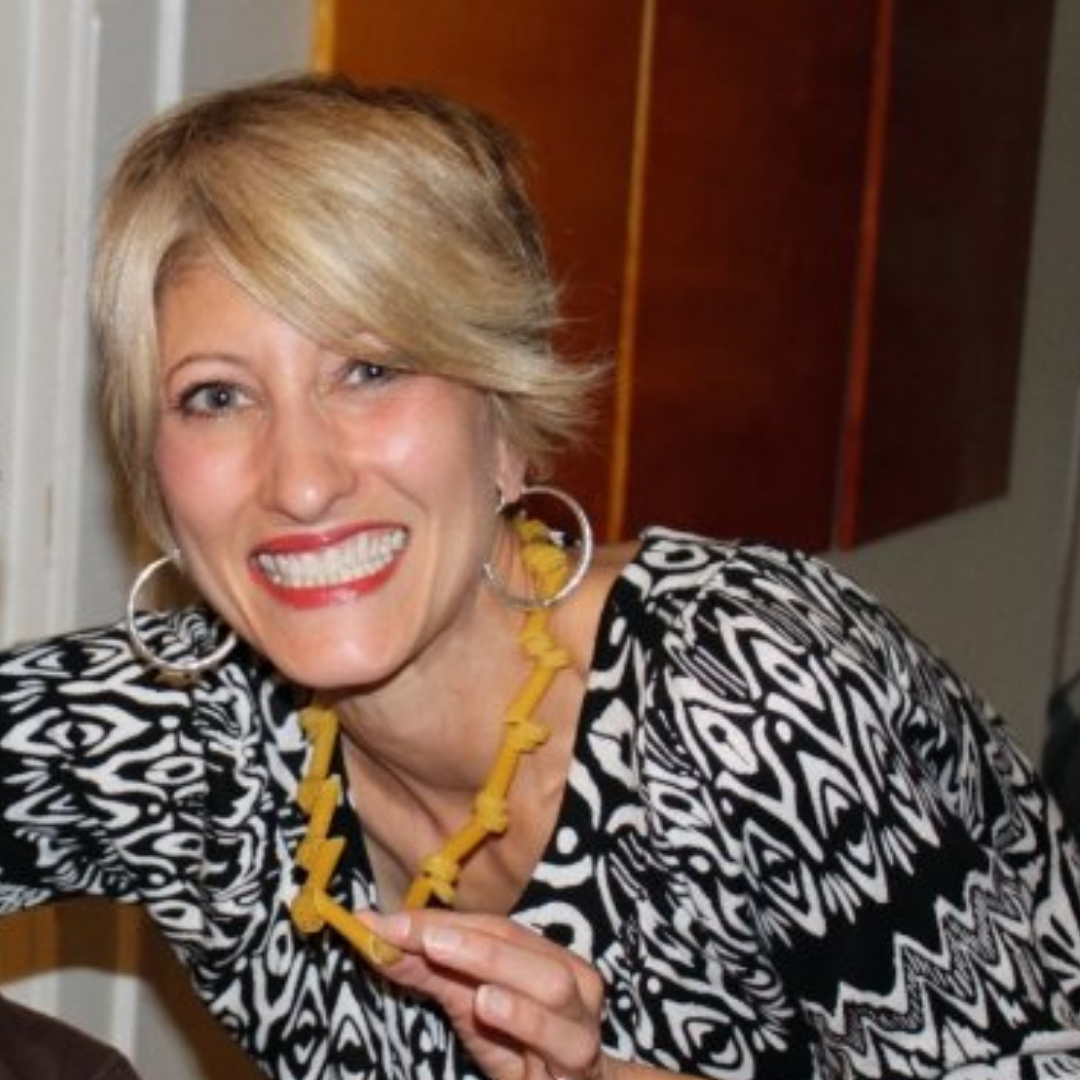 It took a brave stylist and myself to make the move. I found my partner in freedom after firing my stylist for years because she talked trash about my desire to go gray. I will tell you that I had many friends that gave me grief over the move and told me how terrible I would look and that I would look old. The truth was I looked “old” with blonde hair. I became one of those people who tried too hard and it was looking like I was fighting with aging, when I should be embracing it. We all age! Being your freshest, most lovely you is the goal, not fighting the process. It’s simply sexier to be harmonious with your skin than to fight it.

I even had an image consultant who during certification training told me that I should dye my hair, because it made me look older and that it did not look good on me at all. This same consultant continued to address my gray hair as if it was a direct attack on her and called me out in front of my colleagues going into detail of how bad it looked. Thing is, I knew that was a lie. I knew I looked amazing!

At this point, I had completed the transition and had had many people stop in the street and ask to take my picture. I had received multitudes of random comments from persons of all ages. My daughters would laugh when I would get compliments from men their age and younger while I was with them. Most importantly I FELT GOOD. When I looked in the mirror my body coloring was in harmony and I looked fresh and balanced, younger even. I looked younger because I looked FRESHER and fresh is always youthful. My fine lines and all my years were still there, only diffused by a harmonic natural beauty that we all have access to.

The Image Consultant that shamed me during a training class, I thank her, because of her I created my own color analysis system and wrote a series of books that all started on the 9-hour drive home (I wasn’t driving don’t worry). The color analysis system turned out to be the best thing I have ever accomplished (business-wise) and the books are in the process of being published. This was ten years ago, those books have been edited hundreds of times but my gray tresses never. Once I took the plunge I embraced it and I am so happy I did.

Circling back to the image consultant who threw shade on my gray hair, I won’t lie, I was pissed as hell.  When she said those things she did so with a look of disdain, all while explaining to me why I should transform myself to xyz. That night, I contemplated her words, facial expressions, and thoughts. I disagreed 100% and yet even with knowing the truth, my confidence faltered just a bit. If I had just an ounce less self-esteem and knowledge of the truth, I would have gone to the drug store and colored my hair in my room that night. As it was, it took all of me to return to complete the training process. My husband joined me the following night and he 200% agreed that I looked amazing! In fact, he said, “You look sexy”. Doug, my husband, and I tell it as it is to each other. If he did not think I was “sexy” with gray hair he would have not said it.

On the way home, I vented for 9 hours straight and then came to the realization that we have all been sold that lie. Even myself, I too had suggested people color their hair, because that was the lie we were sold back in the '80s and '90s when marketers came up with slogans like, “I’m gonna wash that gray right out of my hair.” These are the ideas that dug in with clamps to people's brains, even though it was so old-fashioned, no pun intended. We, all of us, living in this era had been lied to by countless marketers of the beauty industry that gray was not cool, it was a sign of old age and death. It was that slap in the face I dearly needed. I am glad it stung and hurt as it made me analyze my own parroting of hurtful stereotypes. This thought process had been pushed upon us all, including me. This trainer and the ones before her all thought the same. It was what was taught to them and myself. I too had been taught by several image educators and thought this way for years. I was among those that allowed this mindset to live on... until I didn’t.

I was mad and embarrassed at myself for allowing myself to have been sucked into marketing lies. It was time to be the best me and that was one of boldness. Since I went gray it is more trendy, it’s everywhere. People now dye their hair gray and hair color manufacturers have perfected the ability to do so.

I could feel strong and bold in this moment because at that point I had done the work. I had gone through the growing-out process. When I started growing out my hair, I cut it so short and neglected to warn my husband that I was doing this (more later). I saw the look on his face when I arrived home. I asked him what he thought and he looked at me with sympathy and said, “I don’t like it”. I was wise enough to ask him, “Do you not like the extreme shortness or the color?”.  He did not like the extreme shortness, which was so so fair as the cut wasn’t a style at all. You would think I could have pulled it off, as I have had short hair for years. I thought I could pull it off. I could not. It was too short and tight for my very tiny head. I was not offended by his aversion to my hair cut as I also was not a fan. I made my stylist do it. My exact words were, “even if I cry, do it!”. I told her how to cut it, she obliged only because she is an amazing person and had a vision for a better future for me. She did so boldly and neither of us cried. The cut was one of strategy not of beauty.

For those of you in Chattanooga, her name is Rachel McCoy. She owns and operates the Strand and yes she is amazing all the way around. Rachel was my girl, my partner in becoming the true me, one that was much more beautiful than trying to be something I was not. She is a hair goddess. I think we both would have cried if we had not made a pact. The point is I had a goal. The cut was a strategic approach to what was to come.

For months prior to taking the leap I had noticed that I had a very light stripe framing my face. I knew this because I could see the grow out prior to getting my hair colored. I started with allowing that to grow in and no longer bleach that part. That stripe was very white.

My next observation was that the hair at the base of my neck and underneath the top was a deep gray. My hair was always short and the back of my neck was always cut tight so we stopped coloring that. Prior to my severe hair cut we were only coloring the upper layers of my hair and avoiding the stripe framing my face and not coloring anything that was tightly cut. Yes, it was strange for a bit. I have to say that Rachel did the best job of making that work for me. Then on that day, the day I could no longer resist, we cut everything short except those front tresses that were not bleached. If you can imagine a long swoopie tress framing my face and then super short everywhere else.

Looking back this is my progression to becoming the true me. Being myself despite what others think.

My Mother passed away from breast cancer at 59. She was never a fashionista however, she was bold. She let her hair go gray years prior. I always liked it and I told her so. I never thought it looked bad on her. She inspired me to do the same. So when I said, “We should embrace age” I meant it. She died young and it is a blessing, a true blessing to hit our elder years. Many of my classmates have passed and I realize that life, as it is, as we are, is a gift. What we do with that gift is up to us. My desire is to be part of the change, share love, joy and hope despite (and because) of my age.